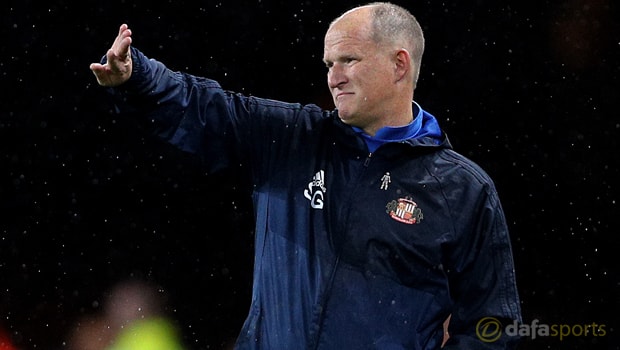 Sunderland manager Simon Grayson was left frustrated after Tuesday’s defeat to Nottingham Forest and he’s also revealed Lewis Grabban could be set for a spell on the sidelines.

The north east side have struggled to get to grips with life in the second tier of English football after suffering relegation from the Premier League last term.

Tuesday’s defeat now leaves Sunderland, who are priced at 10.00 to be relegated, sitting 20th in the Championship and Grayson is coming under serious pressure.

Former Sunderland man Daryl Murphy netted the only goal at the Stadium of Light but Grayson felt his men deserved more on the night.

Grayson said: “It’s probably the most frustrating result that we’ve had because we didn’t deserve to lose that game tonight, without a shadow of a doubt.

“I thought the players responded from Saturday, they showed a lot of bravery with and without the ball, they were confident, so it is a kick in the teeth when you lose a game like that.

“We didn’t get the breaks when we needed things to fall in the 18-yard box, and then the one mistake that we made throughout the whole of the night, we got punished for.”

Sunderland are now without a win in five Championship outings, having lost the last four on the bounce, and an injury sustained to frontman Grabban could also prove to be a big blow over the coming weeks.

He added: “It looks like Lewis tweaked his hamstring. We will see the severity of it this morning.

Of course it would be a blow because he is a good player, we are a little bit short in those numbers.”