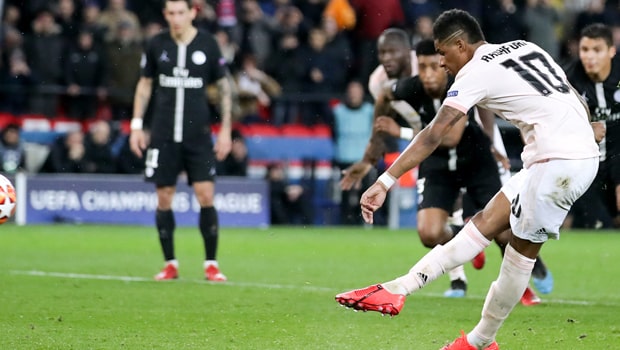 The Red Devils were awarded the penalty in stoppage time at the Parc des Princes after VAR intervention when Diogo Dalot’s shot struck Presnel Kimpembe on the arm and went behind, seemingly for a corner.

However, referee Damir Skomina reviewed the incident and decided a penalty was the correct call, ensuring Rashford had the chance to seal a famous and dramatic success.

The England forward was ice-cool as he thumped his spot-kick past Gianluigi Buffon in the 94th minute to seal a 3-1 win and progress on away goals for United.

Solskjaer was far from certain he would score, though the Norwegian suggests such doubts were likely removed from Rashford’s mind.

“Absolutely fantastic,” Solskjaer said. “Fearless, the kid is. He’s got no doubt, no fear and when you’re young you don’t have any fear. Of course, I wasn’t sure we were going to score.

“I’ve been in Champions League before with Molde and we played Basel and we got a pen last minute to go through and we missed it, so of course that went through my mind.”

No team had previously lost the first leg of a Champions League knockout tie 2-0 at home and managed to progress, ensuring United’s win left the big-spending Ligue 1 champions reeling in Paris.

Finishing with teenagers Tanith Chong and Mason Greenwood – in his first-team debut – on the field, Solskjaer paid tribute to the spirit of his makeshift side, though he was coy on whether the result has secured him the manager’s job on a full-time basis after this season ends.

“I keep doing this job as best as I can every single day and let’s see where it takes us,” he said.

“It’s been a fantastic time with the players and the staff I’ve got working with me. I’m going to enjoy this job as long as I’ve got it.

Man United are 10.00 to win the Champions League this season following their dramatic Parisian comeback.