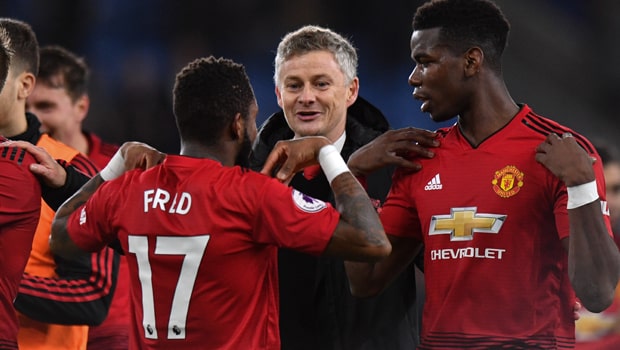 After the French midfielder was left out of United’s last games under previous manager Jose Mourinho, he was recalled to the starting line-up by the Norwegian, who watched on as Pogba scored two goals in the 3-1 win over Huddersfield.

The victory followed on from a good display in the 5-1 win over Cardiff, Solskjaer’s first game in temporary charge, and having coached him in the past, he said that Pogba was enjoying his football again.

Solskjaer said after beating the bottom-of-the-table Terriers: “That’s the Paul I know, the Paul I have known since he was in the reserves and in the youth team.

“He’s always been a happy boy, he’s always had a big smile on his face, and when you score a goal, or if you score two, of course you’re happy. And when you play football for Manchester United you should be happy.”

Nemanja Matic gave United the lead over Huddersfield, with Pogba scoring twice in the second half, while Mathias Jorgensen got a consolation for Town.

Solskjaer insists it will take him time to make a real impact during his time back at Old Trafford despite two good results so far.

“I want my team to play in a certain way and you give them little pointers here and there, and it’s a work in progress,” he added.

“It’s going to take time for the players to go from one manager and the details he wanted. I’ve got a little bit of a tweak.”

The latest result kept United sixth in the Premier League table, eight points behind Chelsea in fourth. United host Bournemouth on Sunday before travelling to Newcastle on January 2.