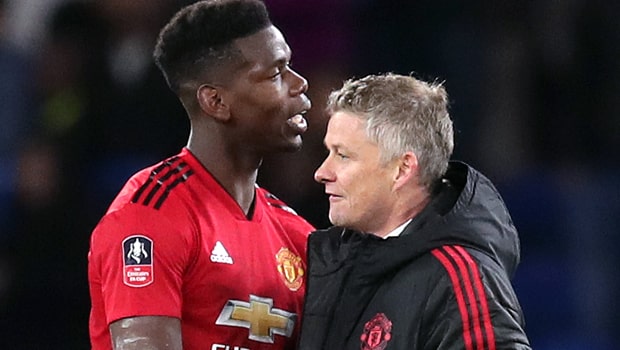 France star Pogba has returned to top form since Solskjaer took charge of first-team affairs at Old Trafford before Christmas and he is enjoying his best goalscoring season with the club, as he has netted 14 times across all competitions.

However, during the international break, the 26-year-old fuelled speculation regarding a future switch to Real by suggesting it would be a dream for anyone to play under Zinedine Zidane at the Bernabeu.

Zidane has also recently suggested that Pogba’s future could lie in Madrid, but Solskjaer has now moved to play down such talk and he fully expects the former Juventus star to remain with the Red Devils for the long-term.

When asked if he was planning to build his team around Pogba, Solskjaer told Sky Sports: “Definitely. I said that a few years ago as well.

“Paul is happy here, he is playing well. There was talk about the international break and what kind of issues that causes.

“One of the issues is, the players are always available for the press. They are open, and he answered a general question about any player would like to play for Real Madrid.

“He didn’t talk about himself, he is happy here.” Pogba is expected to feature for United when they travel to Molineux to take on Wolves in the Premier League on Tuesday.

United have already lost once to Nuno Espirito Santo’s side this season – going down 2-1 in the FA Cup quarter-finals last month – but they are priced at 1.95 to claim the spoils this time around, while Wolves are available at 3.80 and the draw is on offer at 3.40.