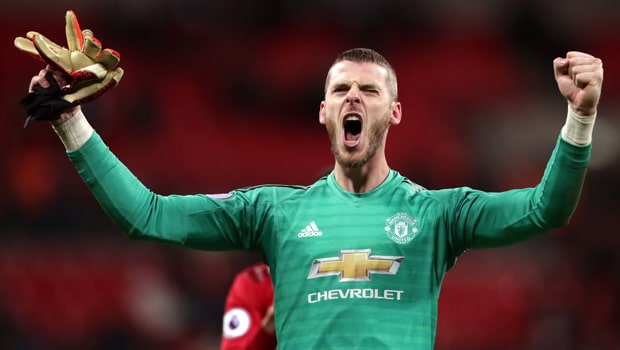 Ole Gunnar Solskjaer feels David de Gea can prove himself to be Manchester United’s best-ever goalkeeper after his heroics in the 1-0 win over Tottenham at Wembley.

The Spaniard made a stunning 11 saves in the second half against Spurs, more than any other Premier League goalkeeper has managed in a single match this season so far.

De Gea repeatedly foiled the likes of Harry Kane, Dele Alli and Christian Eriksen as the Red Devils moved level on points with Arsenal and closed on Chelsea in the race four a top-four finish this season.

During his 11 years as a striker at Old Trafford, Solskjaer played alongside Edwin van der Sar and Peter Schmeichel, but he feels de Gea has it within his grasp to surpass even those legends of the game.

“We’ve had some great keepers at this club and I think he’s challenging both Edwin and Peter for the number one spot historically,” Solskjaer said.

Marcus Rashford scored United’s goal in the first half, amid a controlled and impressive display of counter-attacking play from the visitors. With de Gea’s help, they made it six wins from six under Solskjaer’s guidance.

Having joined United from Atletico Madrid in 2011 and the shot-stopper has won the club’s Player of the Year award in four of the past five seasons.

“He should have held a couple,” joked Solskjaer. “We had a good back four and David in behind them was unbelievable. You are allowed to have a good goalkeeper.

“I’ve played with a few fantastic goalkeepers. We have a tradition of having them and he has grown and grown. He deserves that man of the match today.”

Manchester United are now 3.25 to finish in the top four this season.