Andre Schurrle ready to dig in for relegation scrap 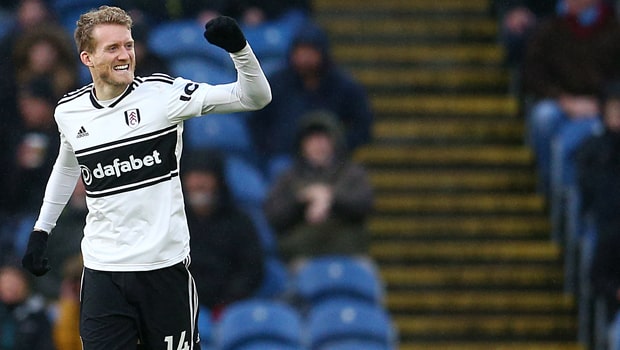 Andre Schurrle admits that losing games week in, week out isn’t something he is accustomed to as Fulham’s struggles go on.

The Whites fell to a 2-1 defeat at Burnley on Saturday, despite the German scoring a stunning opening goal at Turf Moor.

Incredibly, Burnley earned their win without having a single shot on target in the 90 minutes as own-goals from Joe Bryan and Denis Odoi gave the Clarets three points.

It left Claudio Ranieri’s side sitting 19th in the table – five points off safety – and Schurrle, a World Cup and Premier League winner, admits it is proving tough to adapt to a relegation-threatened season.

The playmaker has vowed that he will do his bit to save Fulham. “It’s not easy. I’ve never been involved in something like this,” he said.

“It’s not easy to adapt to losing a lot. It’s not what I am used to, so I have to put my qualities for the team and try to score a bit more.

“We are deep, deep, deep in trouble. It’s not in our own hands, but there is hope and belief.” Losing to Burnley in the manner they did was a bitter pill, having taken the lead and played well.

“It was a great start for us. It was exactly how we wanted to play, in behind and try to turn the people but after that there was nothing from us in the first half, and we got under pressure and didn’t play any football.

“So, first half it was nothing and second half we just couldn’t score.” Fulham are 1.30 to be relegated from the Premier League this season.