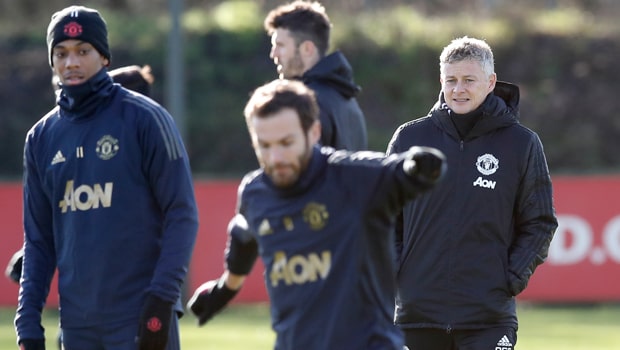 United have won 10 out of 11 games since Solskjaer took over from Jose Mourinho in December, ensuring they can approach this tie with more confidence than might have seemed likely when the draw was made.

PSG meanwhile are set to be without Neymar, Thomas Meunier and Edinson Cavani on Tuesday evening. For Solskjaer, his side have got every reason to be optimistic, not just of knocking PSG out, but of making further Champions League progress this season.

“We can’t look too far ahead, we’ve got to look at PSG now and make sure we go through and take the next challenge as it comes,” he said.

“But I’ve been very pleased with the attitude. I’ve said to the boys, we have to keep working every single day. When we work hard, we work hard. When we have lighter training, we concentrate. Then we can improve and maybe surprise people.”

Man United are 2.30 to win the first leg, with Paris St-Germain 3.00 and the draw 3.50. It is the start of a big fortnight for United’s interim manager.

Solskjaer deflects any suggestion this month will define his dream of becoming permanent boss at the club. “You need to change the script,” he said.

“You have so many ways of asking that question. That’s too simple. There are still a few more months left of this season for me to do whatever I can for the club,” he told a pre-game press conference.