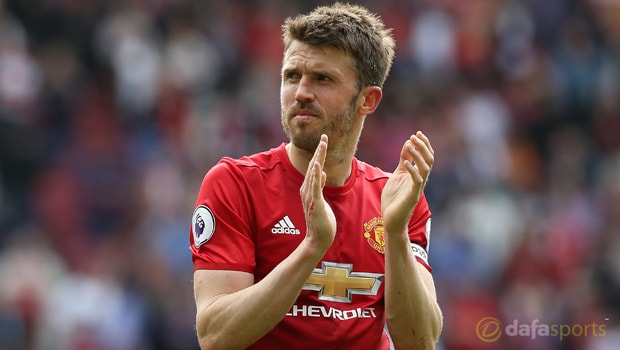 Michael Carrick is looking forward to continuing his Manchester United story after putting pen-to-paper on a new one-year contract that will keep him at the club until the summer of 2018.

Carrick’s previous deal with the 20-time English champions was due to expire at the end of next month but the midfielder will be plying his trade at Old Trafford for another season.

The former England international will be embarking on his 11th campaign with the Red Devils, having joined from Tottenham Hotspur back in 2006 in an £18.6million deal.

First-team opportunities have been limited for the 35-year-old this term, only making 18 Premier League starts as manager Jose Mourinho tinkered with his side on numerous occasions.

The Wallsend-born star has still added three more pieces of silverware to his cabinet this season with United winning the Europa League, League Cup and Community Shield.

The red side of Manchester will be back in the Champions League next year and Carrick is excited to help the club compete for trophies on both the domestic and European stage again.

He said: “What a fantastic way to finish off the season, with a new trophy in our cabinet. I am delighted that my journey with this great club is going to continue.”

United are 4.33 second favourites to win the Premier League next season whilst rivals City, who finished third in the table in Pep Guardiola’s debut campaign, are leading the betting at 3.25.

Mourinho is expected to delve into the summer transfer market once again and there are reports suggesting the club are readying an offer for Inter Milan winger and Croatian international Ivan Perisic.

Paris Saint-Germain midfielder Blaise Matuidi has also been linked with a switch to the Theatre of Dreams and the Frenchman has hinted he could leave the Parc des Princes.