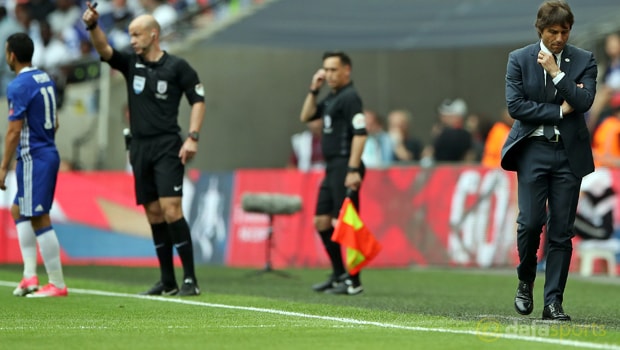 Manager Antonio Conte admits his Chelsea squad requires more strength and depth after losing out to Arsenal on Saturday in the FA Cup final at Wembley.

Chelsea were fantastic in clinching the Premier League title this season as they became the first English side to record 30 top-flight victories in a 38-game campaign, highlighting their overall dominance.

Tottenham Hotspur, who are 9.00 to lift the title next year, were a massive seven points behind the Blues in second and many expected the champions to complete the domestic double in Saturday’s FA Cup final.

However, it was not to be for Conte’s men with Wales international Aaron Ramsey scoring the winner as the Gunners recorded a 2-1 win, becoming the most successful team in the competition’s history.

Nigerian Victor Moses was sent off after receiving a second yellow card for diving and that incident proved to have a big impact on the overall result as the Blues tired late on.

The Chelsea boss was disappointed at missing out on a second trophy in his debut season and admits there are areas of the squad that need some more competition for places.

“We must be cold and analyse the situation,” Conte was quoted as saying by BBC Sport.

“For next season we must pay great attention and understand that we have to improve the numbers and the quality in the squad.”

Chelsea have been linked with a number of potential summer targets with Real Madrid striker Alvaro Morata and Everton talisman Romelu Lukaku said to be high on the list.

The Blues are 4.50 to defend their Premier League title in the next campaign whilst Manchester City are the 3.25 favourites, narrowly ahead of rivals United at 4.33.