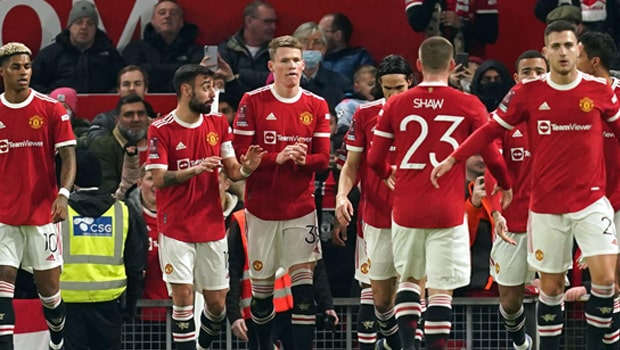 Scottish midfielder Scott McTominay scored an 8th-minute goal to pull Manchester United through to the round of 16 of the FA Cup on Monday night.

The Red Devils hosted the Championship side at Old Trafford with De Gea starting in goal while Diogo Dalot, Victor Lindelof, Raphael Varane and Luke Shaw were in the defence, while McTominay, Fred, Marcus Rashford and Bruno Fernandes formed a four-man midfield in the 4-2-2-2 formation that coach Ralph Rangnick is getting comfortable, but he chose Mason Greenwood and Edinson Cavani to lead the line this time.

McTominay’s goal came in from a Fred cross as he headed in the cross to give United what turned out to be the only goal of the game.

Meanwhile, Aston Villa played hard to get an equalizer with a shot cracking the crossbar while they had another goal disallowed by the VAR for a foul. Steven Gerrard’s side would feel hard done by the result after the efforts they put in the game.

Meanwhile, Manchester United defender Raphael Varane explained that he was happy with the result while defending the VAR decision to rule out Villa’s decision despite being a long process.

“It was a difficult match. We had to suffer a lot on the pitch but together and I liked the spirit of this match. We had the opportunity to score more goals. When it was not possible to play higher up the pitch we were compact and did not let them play easily.” Varane said.

Manchester United had a little dressing room brawl before the game, but Varane stated that the team and everybody in the team are focused on getting results in their games.

Manchester United will now face the Championship side in the next round after Middleborough got past Mansfield in a five-goal thriller at the weekend.