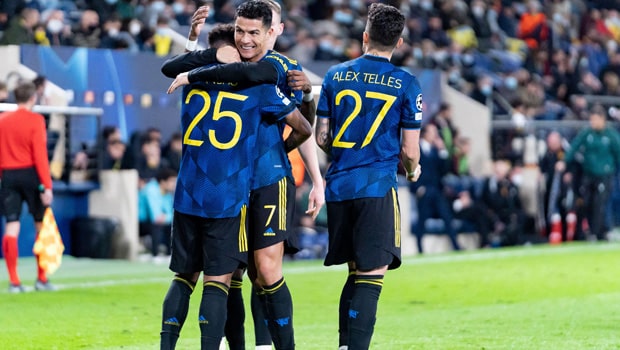 Cristiano Ronaldo opened things up with a lob over goalkeeper Geronimo Rully (78′) before Jadon Sancho (90’) sealed the deal in the final moments for his first goal with United since joining in the summer.

It was Michael Carrick’s first match as the interim manager following the club’s decision to part ways with Ole Gunnar Solskjaer this past weekend.

“When you’ve suffered results-wise and you’re not in a great vein of form individually and as a team then it’s not easy to come out and just let everything click,” Carrick said. “In some ways, it was the best way to win for me, that we had to show some character, we had to dig in, we had to fight.”

Sancho, along with the goal, finished the match with 100% final-third pass accuracy, 6 ball recoveries, 4 tackles made, 2 successful crosses, and 2 shots overall on goal.

“Proud to score my first goal for @ManUtd  in the best competition in world football  @ChampionsLeague,” Sancho said via Twitter. “Great team effort from the boys tonight, we build from this.”

Ronaldo scoring in the Champions League is nothing new. He now has 799 career goals for club and country.

Heading into the match, Villarreal had never beaten an English club in the  Champions League  in 11 attempts — recording five losses and six draw. That tally, up to 12 now, is the most of any side that has faced English opponents in CL without winning

“To finish it off with Jadon was brilliant, it was a big night for him,” Carrick added. “It feels like that game was for Ole.”

Carrick became the first English manager to win his first game in charge of Manchester United since Walter Crickmer in November 1931.

Villarreal will face Atalanta next week for a chance to qualify for the Champions League knockout stages.

United still has one group match remaining, with little to play for however. They will host Young Boys at Old Trafford (8 December).