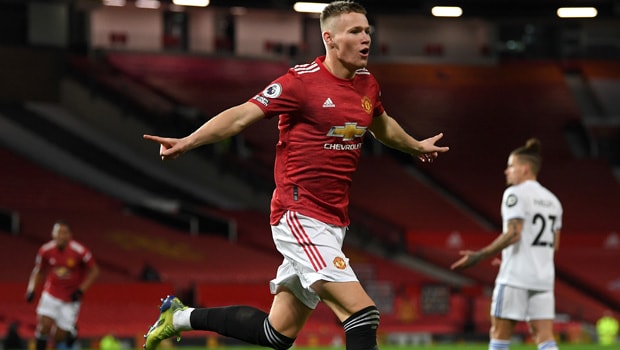 Manchester United moved within 5 points of top-placed Liverpool on the English Premier League table with an outstanding 6-2 victory over Leeds United on Sunday evening.

Scott McTominay made history as he became the first player to score two goals in three minutes in the Premier League.

His first goal came as early as the 2nd minute, while he scored the next minutes immediately to make it 2-0 in favour of the Red Devils.

Bruno Fernandes and Victor Lindelof made it 4-0, but Liam Cooper pulled one back before half time. Daniel James and Bruno Fernandez made the scoreline emphatic, but Stuart Dallas scored Leeds United’s second goal in the 73rd minute.

The win pushes Ole Gunner Solskjaer’s men to third with 26 points from 13 games played, five points away from the table-topping Liverpool, who has 31 points.

Jurgen Klopp’s side had defeated Crystal Palace 7-0 on Saturday. The move to third for United was made possible after Tottenham lost to Leicester City 2-0 at the White Hart Lane.

Manchester United are ahead of Everton only on goals difference in fourth after the Toffees beat Arsenal 2-1 at the Goodison Park on Saturday.

Meanwhile, they are in fourteenth one place above Arsenal with 17 points, three more than the Gunners.

On Monday, Chelsea will host West Ham at Stamford Bridge in a London Derby. A win for the Blues will take Frank Lampard’s men as high as fifth depending on goals difference with Tottenham, who currently sits there.

Also, Burnley will welcome Wolves to the Turf Moor for another epic Premier League tie. In other results from the weekend, Manchester City beat Southampton by a single goal.

Newcastle and Fulham played a 1-1 draw while Sheffield United got only their second point of the season with a 1-1 draw against Brighton.