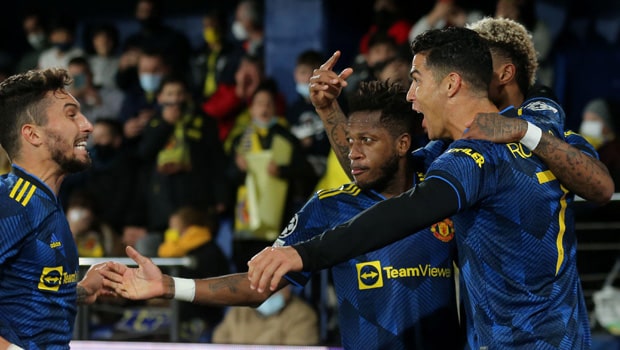 Cristiano Ronaldo scored for the fifth UEFA Champions League game as Jadon Sancho also got his first Manchester United goal since joining from Borussia Dortmund in the summer as Manchester United beat Villarreal 2-0 at the La Ceramica.

Meanwhile, Jadon Sancho scored a 90th minute goal to record his first goal in a Manchester United shirt after 15 games, the England forward has endured a tough start to life at the red half of Manchester.

“It’s not been an easy couple of days for anyone at the club and that result almost feels like it’s for Ole, We had a job to do and things needed to be taken care of. I was happy to do it and thankfully it all went to plan.” Carrick said.

The win puts Manchester United in first place on the group, Villarreall as they also secured a spot in the round of 16 after Atalanta and Young Boys played out a 3-3 draw.

At the Stamford bridge, Chelsea scored four times as they beat Juventus 4-0 to draw level with the Old Ladies with 12 points from 5 games.

Trevor Chalobah, Reece James, Callum Hudson-Odoi and Timo Werner were all on target as the Blues progressed to the next round of the competition.

Meanwhile, Liverpool who have progressed into the next round of the competition will first Portuguese side FC Porto, while Manchester City will play against Paris Saint-Germain in a blockbuster at the Etihad on Wednesday