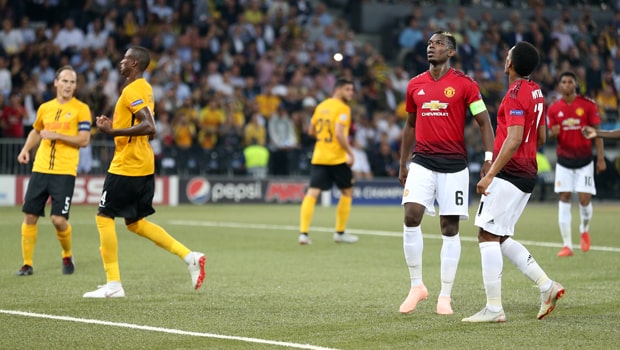 Manchester United full back Luke Shaw says Paul Pogba was outstanding in the club’s 3-0 win over Swiss side Young Boys.

Pogba scored twice, including a penalty kick in the first half to give the Red Devils a commanding lead against one of the rank outsiders in the Champions League.

Anthony Martial sealed a very comfortable win in the second half with his first goal of the season to launch their European campaign in good style.

However, it was Pogba’s display that provided the real talking point as the French World Cup winner, who was captaining the side in Bern, also provided the assist for Martial’s goal.

Despite playing on a plastic 4G surface, which have generated numerous concerns around he footballing world, Pogba controlled the game from start to finish.

And left-back Shaw, who is enjoying some of his best Old Trafford form himself, says Pogba helped inspire them to victory.

“He gets some stick sometimes but we know what quality he has,” Shaw noted, after the game.

“For me, he is one of the best in the world. He is important as captain. He shows on the pitch what kind of leader he is. Hopefully he can carry that on.”

Shaw added: “It was extremely difficult in the first half. We didn’t start bright. The pitch was difficult but we got to grips with it. Paul Pogba came up with a bit of magic for the first goal and that calmed us down a bit.

“It is always tough. The crowd, the pitch and the atmosphere…They were up for it. It is all about the points though and we got them today. We are professional footballers so we need to be able to play on any surface.”

Manchester United are in Premier league action next on Saturday at home to newly promoted Wolves and are priced at 1.57, with Nuno’s men at 6.00, and the draw at 4.00. Pogba is 3.10 to score anytime and continue his good form.