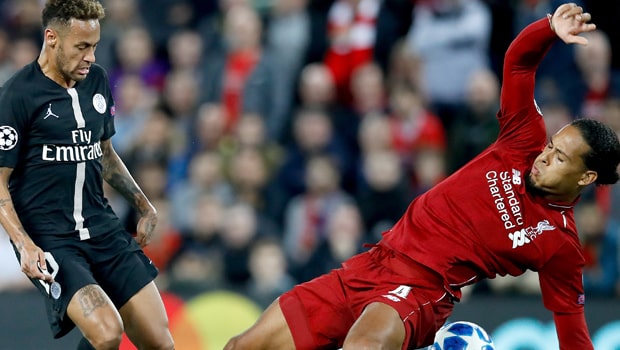 Liverpool defender Virgil van Dijk insists he will not get carried away after an excellent start to the season on both a personal and team level.

The Reds have had a perfect start to the season both domestically and in the Champions League. They overcame the challenge of Tottenham Hotspur on Saturday to win 2-1 to keep up their 100 per cent start to their Premier League season, where they are only behind Chelsea on goal difference.

Then on Tuesday, they faced a tough first game in the Champions League group stages and surrendered a two-goal cushion against Paris Saint-Germain when Thomas Meunier and Kylian Mbappe cancelled out goals from Daniel Sturridge and James Milner.

However, Roberto Firmino’s last-gasp winner stole all three points to give Jurgen Klopp a superb opening month to the season.

Van Dijk has been credited as one of the reasons why Liverpool look so much more of a force, with his commanding displays from centre back since his £75million move from Southampton in January.

However, he says it is vital that they do not get carried away and that there is still a lot of work to do. “We have to keep working hard and stay humble.

We have a tough game on Saturday with Southampton, then Chelsea and Manchester City coming up,” Van Dijk told the club website.

“When games come along every three days you have to be properly prepared, it’s the only way forward. That and the right mindset.

I want to create memories here, I want to win things with this team, and to do that we have to have belief in our ability to beat the best teams.

“We were not in the Champions League final last season for no reason. We already deserve respect for what we did but in football you have to keep proving yourself because it always starts again.

“The season has only just started and we can’t take anything for granted and get ahead of ourselves.”

Van Dijk faces his old club on Saturday as Liverpool welcome Southampton to Anfield and the home side are the overwhelming favourites at 1.20, with Southampton at 15.00 and a draw at 6.50.