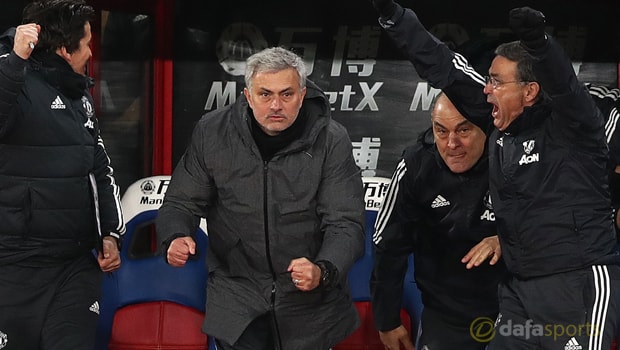 Jose Mourinho has hailed the attitude of his Manchester United players after seeing them come from two goals down to win 3-2 at Crystal Palace.

Monday looked set to be another disappointing evening on the road for the Red Devils, after strikes from Andros Townsend and Patrick van Aanholt put the Eagles clear after 48 minutes.

However, Chris Smalling soon got one back before Romelu Lukaku equalised with 12 minutes left on the clock.

United laid siege to the Palace goal but looked set to be disappointed, only for Nemanja Matic to fire home a stoppage-time winner at Selhurst Park.

The result moved Mourinho’s men back up to second ahead of Liverpool, with the pair set to meet on Saturday lunchtime. Both sides are 2.70 to win at Old Trafford, with the draw available at 3.30.

Mourinho admitted his team were far from their best on Monday but has hailed the attitude they displayed in coming from behind to seal what could prove to be a massive three points.

“It was a fantastic match for the people in front of the screen and in the stadium,” he told Sky Sports.

“Difficult match for me because my team made so many mistakes.

“I don’t like my teams to lose organisation like we did, but amazing match an amazing comeback, and very important victory for us because now we have nine matches to the end and we have nine points to fifth place which is not amazing but is OK.”