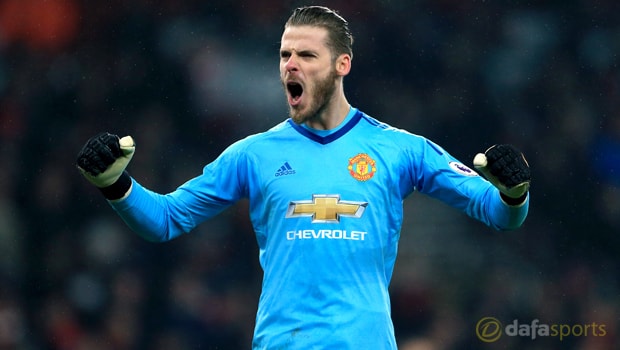 Jose Mourinho says he told David de Gea he had never seen a better goalkeeping performance than the one he delivered in Manchester United’s 3-1 win over Arsenal.

The Spanish stopper made a staggering 14 saves as United punished some suspect defending from the home side to leave the Emirates with three points, despite finishing with ten men after Paul Pogba was sent off.

The Red Devils established an early lead with goals from Antonio Valencia and Jesse Lingard inside ten minutes, both resulting from Arsenal giving away possession in their own half.

De Gea somehow kept Arsenal out until Alexandre Lacazette scored shortly after half-time but a tap-in from Lingard not long after gave United their two-goal cushion again.

De Gea equalled a Premier League record, with his 14 saves matching Tim Krul and Vito Mannone – for Newcastle against Tottenham in 2013 and Sunderland at Chelsea in 2014 respectively – as the most by any goalkeeper in one game since stats began recording 14 years ago.

In particular, a double save to deny Lacazette and Alexis Sanchez with the game poised at 2-1 had jaws dropping and Mourinho was elated with his goalkeeper, and the result.

“I told De Gea after the match, what I saw today was the best from a goalkeeper in the world,” said the Portuguese manager.

“I loved the way my team played and fought. Arsenal played in some period amazing attacking football – creating difficulties for us.

“But I have to say that my players deserve all the great words. I don’t know so many in English but amazing, phenomenal, fantastic. They deserved three points.”

Arsene Wenger meanwhile said De Gea was “man of the match by a clear mile” afterwards.

Man United are now 11.00 to win the Premier League this season, with Arsenal 2.00 to finish in the top four after their first Emirates league defeat since January.