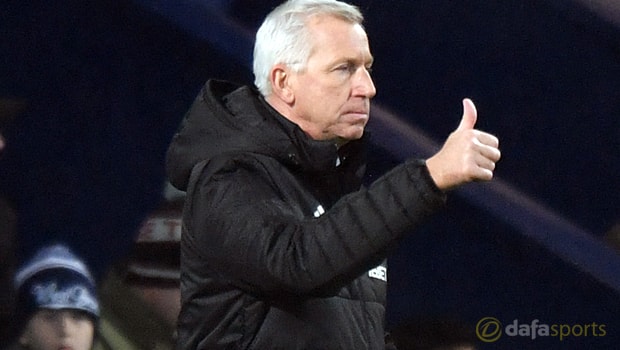 Alan Pardew insisted there were plenty positives to be taken from his new West Brom side’s scoreless draw with former club Crystal Palace at the Hawthorns.

Pardew’s first game as Baggies boss came against the club that sacked him last Christmas after a poor run of form.

West Brom engineered the best of the chances, with Hal Robson-Kanu and Jay Rodriguez forcing Palace goalkeeper Julian Speroni into some routine saves.

Pardew felt his team had largely “bossed” the game and he was encouraged by what he saw.

“If we work like that every week, I’ll be pleased.” said Pardew.

“We lacked a bit around the box but in terms of effort, we were very good.

“We bossed the game, except for one spell.” Albion have now gone 13 games without a Premier League win.

Ten of those were under Tony Pulis’ watch while interim boss Gary Megson oversaw draws with Tottenham and Newcastle before Pardew took the reins ahead of the tussle with Palace.

Having seen enough to satisfy him, Pardew says he is looking forward to working with his newly inherited squad. “Some composure and we might have won,” Pardew added.

“We were really good in the second half. I’m looking forward to working with the guys.”

Palace meanwhile moved off the bottom of the table for the first time this season and Roy Hodgson was content with that upward move, especially after a train delay on their journey, Scott Dann falling ill and regular goalkeeper Wayne Hennessy dropping out with an injury in the warm-up.

“The scenario couldn’t have been much worse.” said Hodgson.

“But I’m really pleased with the way we played and it was a well-deserved and valuable point.

“We were lucky nothing happened to Julian Speroni as we don’t know who’d have played in goal. “Wayne’s back went into spasm.

It’s not the first time it’s happened.” West Brom are 3.00 to win their next game, away at Swansea.

The Swans are 2.50 to take all three points in the Liberty Stadium clash, with the draw 3.25.