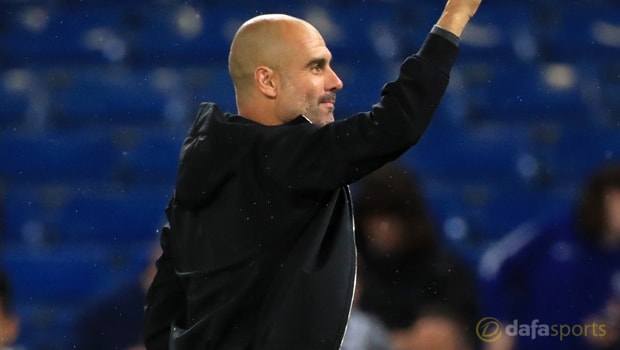 Pep Guardiola hailed the confident display his Manchester City side delivered as they defeated Premier League champions Chelsea 1-0 at Stamford Bridge on Saturday.

The Citizens had just a single goal to show but that, in truth, was scant reward at the end of a game they controlled for long spells.

Chelsea were rarely able to impose themselves on the contest as they went down to a second home league defeat in four games this season and slipped six points behind joint table-toppers Man City and Man United as a result.

Kevin De Bruyne scored a sublime winning goal against his former club midway through a second half that City dominated.

Guardiola was delighted with the amount of control his team achieved, insisting they had reduced the champions to firing long balls forward.

“We are so happy. The most important thing is to win the game but the way we played, especially in the second half, was pleasing,” said the Spaniard.

“We had control and in the second half we adjusted our possession and the way we attacked. They could not play and had to do long balls.”

The win completed a dominant calendar month for Guardiola, who could scarcely ask more of his team currently.

The win at Stamford Bridge was achieved without leading scorer Sergio Aguero, who injured ribs in a car accident in Amsterdam on Thursday.

Man City are 1.75 to win the Premier League this season while Chelsea are 8.50 following their latest setback.