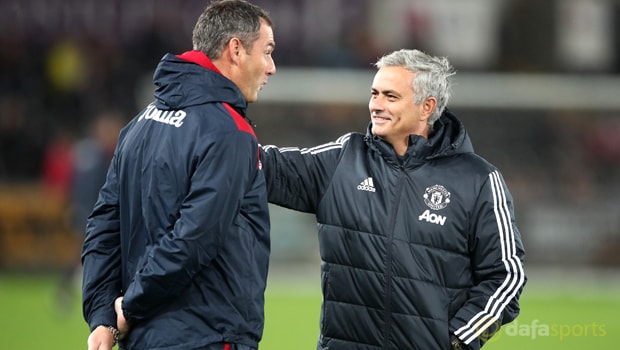 Jose Mourinho has hailed the attitude and depth of his squad following Tuesday’s 2-0 League Cup win at Swansea.

The Portuguese ripped into his players in the aftermath of Saturday’s 2-1 defeat at Huddersfield but had no such issues at the Liberty Stadium in the Carabao Cup succes.

Jesse Lingard was the hero, taking advantage of a rare start to bag a brace in what was a fairly comfortable night all round for the Red Devils, despite making a hatful of changes.

A win could be crucial in their bid to keep tabs on local rivals Manchester City and Mourinho is sure to go into the game with a more upbeat mood than against the Swans.

The 54-year-old concedes he was impressed with the way his players handled Tuesday’s clash and is now looking for them to kick on after such a comfortable night.

He told Sky Sports: “Since the first minute we felt we were in the game, we had immediately some corners, pressing high and comfortable on the pitch. The attitude was good.

“But I don’t think [it was easy] I think they have a good squad, a squad with lots of options.

We were really comfortable, the attitude was really good, I think Romero and Smalling gave us big stability.

“I’m really happy. It was quite comfortable, no injuries, so a good day for us.”