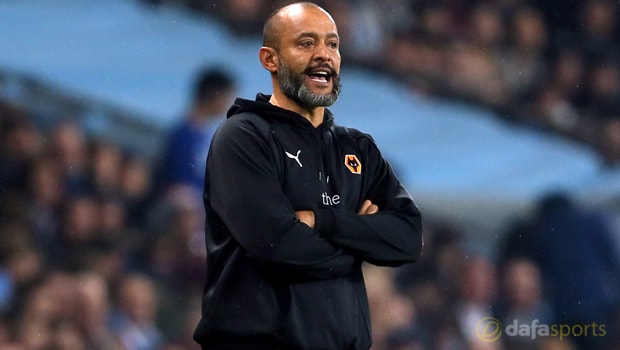 Nuno Espirito Santo has backed the Wolves fans to cheer his side on to promotion following Tuesday’s EFL Cup defeat to Manchester City.

On a very wet night at the Etihad, the Championship leaders gave a superb account of themselves against their Premier League counterparts and arguably should have won in 90 minutes.

Both Helder Costa and Bright Enobakhare spurned chances and, after Enobakhare again went close in extra time, penalties were required.

Misses from Alfred N’Diaye and Conor Coady eventually led to Wolves’ elimination but Santo will have been encouraged by how his second-string performed against a strong City side.

Just as pleasing will have been the attitude of the fans who made the trip up the M6, refusing to let the conditions get them down as they cheered their side on throughout.

They are sure to take another decent following to Queens Park Rangers on Saturday for a game the Molineux-outfit are 2.20 to win, with the draw 3.40 and the R’s 3.30.

Wolves are currently 1.80 to win the Championship but Santo believes it will be down to more than the club’s sizable coffers if they do gain promotion.

The Portuguese coach feels the club’s fans showed on Tuesday just how positive an impact they can have on his players in their fight for promotion.

“It was too bad they couldn’t celebrate but it gives us hope for the future that together we are stronger,” he said.

“It (the support) was a big help for the boys to keep working hard and sticking to the plan.

“We knew we were going to face a fantastic team. Fantastic players, fantastic coach, fantastic atmosphere.”