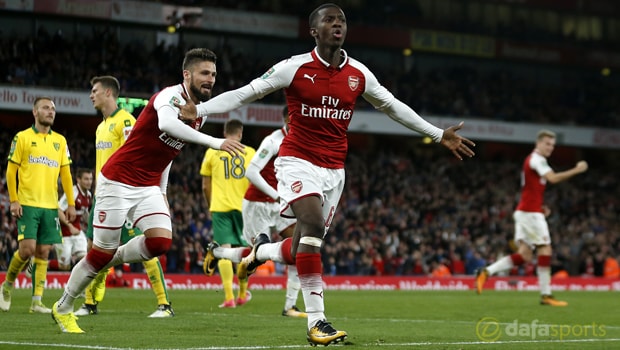 Trailing Championship Norwich 1-0 in the League Cup, Wenger brought Nketiah on with five minutes to go and he made an immediate impact, equalising with his first touch before following it up by heading home the winner in extra-time.

England under-19 star Nketiah has been with the Gunners following his release by Chelsea in 2015 and Wenger admits his movement and anticipation of the game has meant he has kept a close eye on the 18-year-old.

Despite his match-winning cameo, he is unlikely to be involved on Saturday when his side return to Premier League action against Swansea.

However, Wenger believes the youngster has a big future ahead of him and has hinted the Lewisham-born forward will get chances to impress due to the club’s philosophy of blooding youngsters.

“No I can’t remember a player having such a dramatic impact,” Wenger said.

“I especially liked the header he scored because he’s not tall.

“You see the way he took it, he has not just a fantastic leap but also a determined attitude, character and desire to score.

“It was a big gamble but I know he can score and he’s not afraid. He can smell the combination movements, he can give and go.

He has top qualities and is one of the players who impressed me most in pre-season and that’s why I trusted him. Hopefully he will have a long career at Arsenal.”