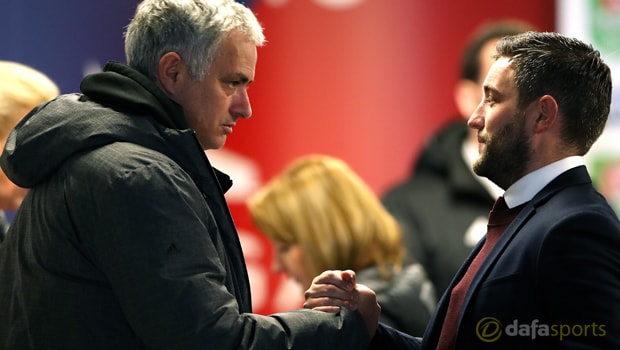 Jose Mourinho believes Bristol City were “lucky” to secure a 2-1 victory over Manchester United in Carabao Cup quarter-finals but he has also praised the spirit of the Championship club.

The Robins pulled off a huge shock at Ashton Gate on Wednesday as they progressed through to the last four of the competition thanks to a stoppage-time winner from midfielder Korey Smith.

City showed great energy and belief throughout the contest, and they originally took the lead through Joe Bryan early in the second-half, before Zlatan Ibrahimovic grabbed an equaliser for the visitors just seven minutes later.

United also twice hit the post during the contest and boss Mourinho believes Bristol City were fortunate to progress through to the semi-finals, but he was also keen to keep the focus on the Championship club’s performance.

“My thoughts are they were a bit lucky,” he told Sky Sports. “But they fought a lot to be lucky.

“They were very lucky in the last second to win. But again, I don’t want me saying they’re lucky to be the main thing.

We know how to lose and win and we say congratulations and wish them well in the semi-finals.”

Bristol City boss Lee Johnson/b> did not quite agree with Mourinho’s statement, as he felt his side looked like the Premier League team for most of the contest.

“I thought at times tonight we looked like the Premier League side,” he said.

The Robins’ reward for progressing through to the last four is a two-legged tie against Manchester City in the New Year.

Johnson’s men are also going for promotion to the Premier League and they are priced at 2.70 to claim their place in the English top-flight come the end of the season.