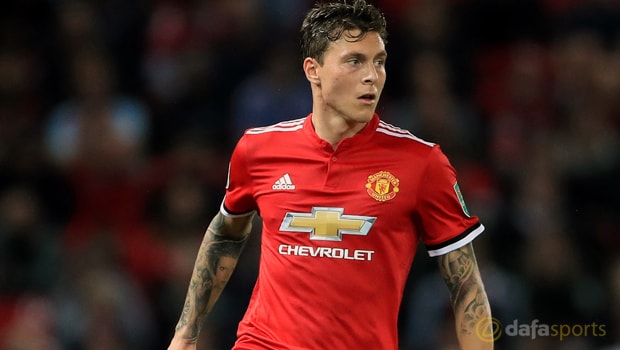 Sweden head coach Janne Andersson says it is frustrating Victor Lindelof is not getting more playing time for Manchester United but he hopes this will soon change.

Lindelof made the switch to Old Trafford from Benfica for 35 million euros this summer, putting pen-to-paper on a four-year contract, and he was expected to be a major part of the first team.

However, the 23-year-old is yet to make his Premier League debut and has only been included in one matchday squad, increasing the defender’s frustration.

The Swede has been restricted to appearances in the UEFA Super Cup, Champions League and League Cup, with Phil Jones and Eric Bailly the preferred options in England’s top flight.

Lindelof could be handed an opportunity on Wednesday night for the Champions League clash at CSKA Moscow although England international Chris Smalling is also pushing for a start.

Andersson admits it has been annoying to see so little of the defender in this campaign but he is keeping his fingers cross this situation changes sooner rather than later.

He told P5 Sthlm radio: “It’s a frustrating thing in this job, I cannot influence anything.

It is clear that over time, I want all our players to play as much as possible, at as high a level as possible.

“So over time it’s a little unfortunate. But we’ll see, he has played some matches. We hope that he will be even closer to the team.”

United, who are unbeaten in the Premier League this season, are 1.67 favourites to pick up the win in Russia, a draw is priced at 3.75 while the hosts are 5.25 outsiders.