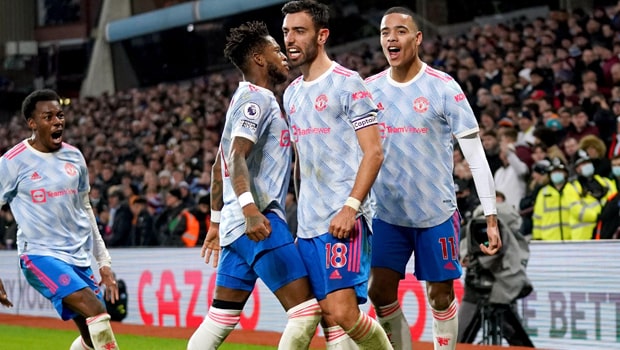 Former Manchester United captain Roy Keane heaped praise on midfielder Bruno Fernandes after the playmaker scored a brace for Manchester United against Aston Villa at Villa Park on Saturday. The Portuguese player found the back of the net in the sixth minute after his long-range attempt went in following a mistake from Villa goalkeeper Emiliano Martinez.

Subsequently, Fernandes scored in the 67th minute after an assist from Fred. But despite taking a 2-0 lead, Manchester United had to settle for a draw as the home team bounced back stronger in the last 15 minutes. Jacob Ramsey got one back for Aston Villa in the 77th minute while Phillippe Coutinho scored the equalizer for the home side after four minutes.

Fernandes wasn’t in the best of forms in the recent past but this performance would have certainly added a shot in his arm.

Roy Keane said while talking to Sky Sports after the game, “It was brilliant, brilliant quality. His first touch sets him up, poor play from Villa, credit to United. A lovely finish, he made it look very easy. He’s got to be happy with his performance, two good goals. He does a lot more good than negative stuff. He’s on the bus back thinking I’ve scored two goals, that’s pretty good.”

Meanwhile, Manchester United will be disappointed after they dropped two crucial points despite having a 2-0 lead. Thus, the Red Devils are currently placed in seventh position in the points table.

United had defeated Aston Villa by 1-0 in the third round of the FA Cup but could not repeat the same performance in the Premier League. Ergo, the Red Devils are yet to register their first win of 2022 in the league.

Manchester United will next face Brentford on Wednesday night.