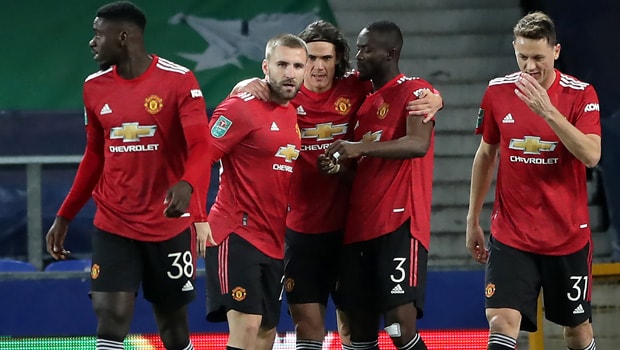 Edinson Cavani and Anthony Martial both got on the score sheet as Manchester United recorded a 2-0 victory against Everton in their Carabao Cup quarter-final on Wednesday night.

Manchester United have been in terrific form coming into the match and made a lot of changes to their line-up. Ole Gunnar Solskjaer made nine changes to his squad in total compared to Everton’s three. However, that did not affect their rhythm as they dominated entire game.

Ole Gunnar Solskjaer’s lads have been in terrific away form this season and went into this match having won all eight of their domestic away games and scoring at least three goals on each occasion.

United did not create a lot of goalscoring opportunities but had a few clear cut chances. Cavani saw his volley at the far post saved, Mason Greenwood’s header went wide after great link up play with Alex Telles, and Paul Pogba should have scored a header from a corner, but nodded it right into the gloves of Everton goalkeeper Robin Olsen.

Everton had a few chances themselves as Dean Henderson had to fully stretch to keep out Gylfi Sigurdsson’s free-kick eight minutes before half-time.

Cavani was very fortunate to be on the pitch after a clash with Yerry Mina early in the second half. The former Paris Saint-Germain striker grabbed Yerry Mina’s throat, but was lucky to avoid getting sent off.

In the 88th minute, United would get their breakthrough goal. Edinson Cavani would fire a wonderful left-footed strike into the bottom left corner from 25 yards, beating Robin Olsen.

After the goal Everton sent players forward in search of an equaliser, and that gave United the opportunity to counter. Anthony Martial sealed the victory in the sixth minute of stoppage time, after he slotted the ball past Olsen when Rashford played him in.

Up next for United is a tough Premier League tie. Man United travel to Leicester City on Boxing Day, while Sheffield United will welcome Everton.