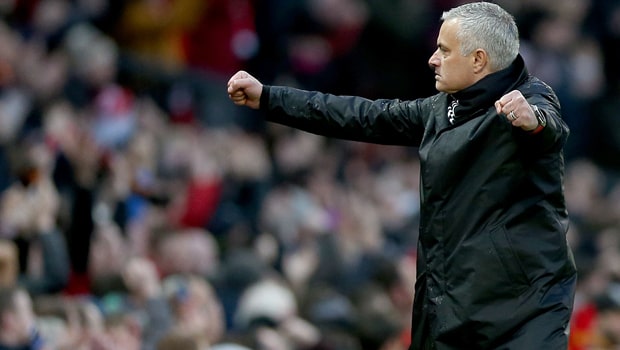 Jose Mourinho was thrilled after watching Manchester United play ‘beautiful football’ in a 4-1 win over Fulham at Old Trafford.

It hasn’t been as easy time for the Portuguese manager or his Red Devils side recently, but they had few problems in seeing off basement boys Fulham.

Ashley Young, Juan Mata and Romelu Lukaku all scored during a one-sided first half for the home team, who netted their biggest league win of the season.

Aboubakar Kamara scored from the penalty spot midway through the second half after he’d been tripped by Ander Herrera as Claudio Ranieri got a response have subbed leading scored Aleksandar Mitrovic at the break.

However, the visitors were reduced to ten men almost from kick-off when Andre-Frank Anguissa picked up a second booking, leaving United in cruise control and Marcus Rashford to add their fourth late on.

Mourinho was purring afterwards, describing the first half as a ‘perfect’ showing.

Mourinho conceded that after a shaky run of results the win was needed and he insists his players should take belief from it.

“We needed it. The last three matches we didn’t lose, but didn’t win. Now we have two away matches, then two at home. Let’s see if we can get more points from those matches,” Mourinho added.

“The players have shown they can be a better team than they are. When there is solidarity in the team, everyone giving their maximum, you attract more positive things.”

Man United are 5.50 to beat Liverpool in their next league game at Anfield. Jurgen Klopp’s team are 1.60 while the draw is 4.00.