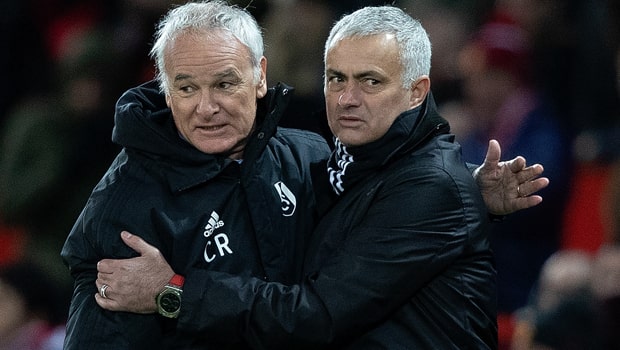 Claudio Ranieri described his Fulham players as ‘lambs’ following a forgettable first half performance against Manchester United in a 4-1 loss at Old Trafford.

The Red Devils were able to dominate at will during the opening 45 minutes, with Fulham standing off too often as Ashley Young, Juan Mata and Romelu Lukaku scored to end the game as a contest by halfway.

Ranieri hauled off leading scorer Aleksandar Mitrovic at half-time and Fulham stabilised in the second period.

They even pulled one back Aboubakar Kamara was tripped by Ander Herrera and rolled home the resulting penalty midway through the half.

Hopes of a comeback were thwarted when Andre-Frank Anguissa received his second yellow card just moments after however and Marcus Rashford added United’s fourth late on.

Bottom-of-the-table Fulham have now conceded 40 goals in 16 matches and Ranieri – in charge for four of those games – was unhappy with what he witnessed for 45 minutes against Jose Mourinho’s side.

“In the first half we were shy, we were waiting,” said Ranieri.

“Why? Why were we waiting? The first half was a warm-up.

“I want my team to play and fight for every single ball. We have to be stronger, more confident in our qualities.

“In the first half it was 11 lambs against 11 wolves. The wolves ate the lambs.”

Fulham are the only team not to have kept a clean sheet in the Premier League this season, while they have now conceded at least three goals in a match in seven of their games.

Fulham are 1.73 to be relegated from the Premier League this season, while they are 2.75 to beat West Ham at Craven Cottage next weekend.