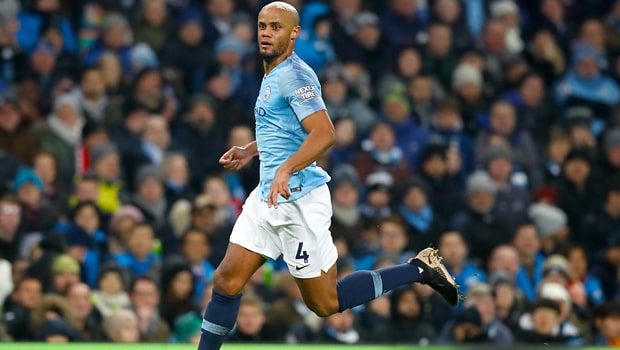 Manchester City captain Vincent Kompany is not worried about his future at the club despite being out of contract at the end of the season.

The Belgium international is City’s longest-serving player having joined back in 2008 and he has played a pivotal role in helping the club establish themselves as a powerhouse in both the domestic and European game.

Indeed, Kompany has won seven major trophies during his time at the Etihad Stadium, although his influence over recent seasons has been disrupted due to injuries, with a muscular problem currently keeping him on the sidelines.

The 32-year-old has not featured for City since their Premier League victory over Liverpool at the start of January and it remains unclear whether he will be offered a new contract.

The centre-back is not concerned, however, as he knows City’s focus is fully on the remaining months of the campaign, as it could turn into an historic season for the club, as they are still involved in four competitions.

“Nobody is making any hasty decisions,” Kompany was quoted as saying by Sky Sports.

“That is the key thing. There is no need to look too far beyond. Everybody is relaxed.”

There has been no exact time-frame as to when Kompany will return to first-team action, but it is unlikely he will play any part in City’s league clash with Everton at Goodison Park on Wednesday.

Pep Guardiola’s side are priced at 1.30 to win that contest, while Everton are available at 9.50 and the draw is on offer at 5.50.