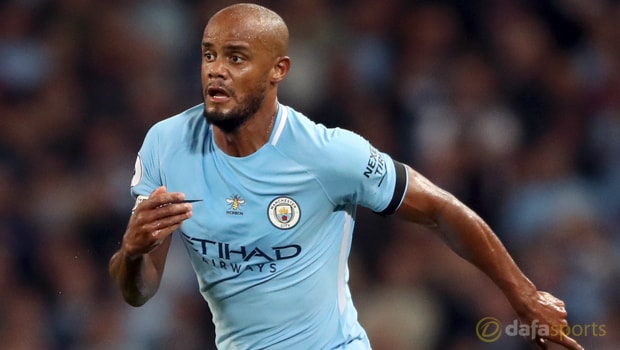 Vincent Kompany feels there is less pressure on Manchester City this season as they are leading the way in the title race.

The Belgian was part of the City side that overhauled Liverpool in the closing weeks of the season to win the title in 2014.

In his first title-winning season, they trailed Manchester United by as many as eight points at a stage before eventually winning on an unforgettable final day.

In the years since, City have routinely been attempting to play catch-up late in the piece.

Now, as they continue on their record-breaking winning streak, Pep Guardiola’s side have opened up a significant lead over the chasing pack, with Kompany hinting there is less pressure attached to what they are doing as any mistake will not be fatal to their title aspirations.

“It’s the first time we have been ahead like this,” he said.

“Honestly, I don’t feel too much difference, but it’s a bit too early to draw any conclusions.

“But I do feel like we have been in much more high-pressure environments, (such as) when we had to play United and we were three points behind.

“Those are the games that are completely different to any others you will play in your life.”

The central defender says it is nice to be able to focus on the performances for now, not just churning out results.

“We are in a position where we can just focus on our football, not anything else, and winning the game and having the performance at the same time,” he added.

“It’s a bit different, but the desire to win is there.”