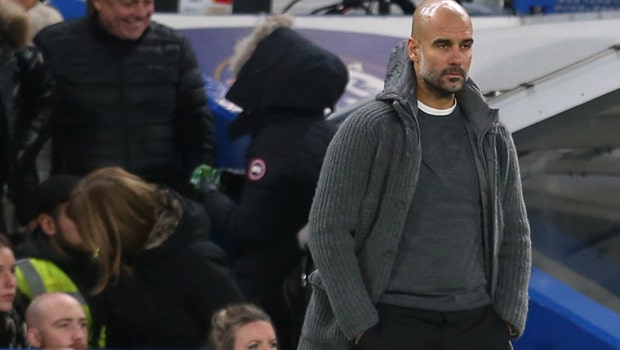 Pep Guardiola refused to criticise his Manchester City side after their unbeaten start to the Premier League season ended with a 2-0 reverse at Chelsea.

The champions ceded top spot to Liverpool on Saturday, with the Reds having brushed aside Bournemouth 4-0 at the Vitality Stadium early in the day.

Man City bossed possession at Stamford Bridge but couldn’t get their noses in front and they were punished on the stroke of half-time when N’Golo Kante scored with Chelsea’s first shot at goal.

That gave the Blues a platform and some belief, resulting in a more even contest after half time.

With no Sergio Aguero, the visitors lacked a killer touch and David Luiz duly glanced home a near post header from an Eden Hazard corner with 12 minutes left to wrap up the win.

Guardiola took umbrage at the suggestion his team suffered an ‘off day’ when speaking to the media afterwards.

“In the first half, we were exceptional.

“In general, we were fantastic. I don’t have any regrets. We came and showed we wanted to win. We created chances. They had one in 44 minutes and we conceded a goal. Sometimes that happens.

“It is emotional for me to see these players do what they do every three days. We were outstanding except for five to eight minutes.”

Guardiola has lost three league games against Chelsea, more than against any other side as a manager.

His team are 1.36 to retain the Premier League title, with new leaders Liverpool now 3.10 and Chelsea priced at 41.00 after their Stamford Bridge win took them to within eight points of the pacesetters.