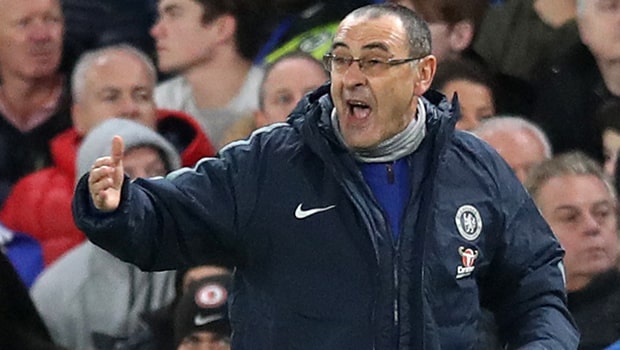 Maurizio Sarri challenged Chelsea to maintain their motivation levels for each game they play after a 2-0 win at Stamford Bridge ended Manchester City’s unbeaten start to the season.

N’Golo Kante scored on the stroke of half-time with Chelsea’s first meaningful attack of the game, seemingly bursting City’s rhythm when he did.

Chelsea were assured in the second half and a glancing header from Davis Luiz 12 minutes from the end secured the win.

The Blues were strong and disciplined in defence as Man City dominated possession in the first half, something that gave Sarri particular pleasure.

Kante’s opening goal came from Chelsea’s first shot of the match in the 45th minute, the longest they have had to wait for a shot in a home league game for more than a decade.

All facets of their game were impressive, said the Italian, though he suggests they’ve got to work to find a way of bringing the same attitude to every match they play.

“I am very happy with the win because it is not very easy to win against Manchester City or Pep Guardiola.

I am happy with the mentality of the team in this match,” Sarri said.

“It is difficult for us to find motivation but when we have it, we are a very strong team. We played with a very good level of application, determination and the right level of aggression.

“My players have to continue like this. We started well in the second half and in the end we deserved to win.”

It was Sarri’s first victory over Guardiola, while Chelsea are now unbeaten in 12 Premier League games at Stamford Bridge – their best run for more than three years.

Third-placed Chelsea are 41.00 to win the Premier League title, while Man City have slipped behind Liverpool this weekend and are now 1.36 to retain their crown.