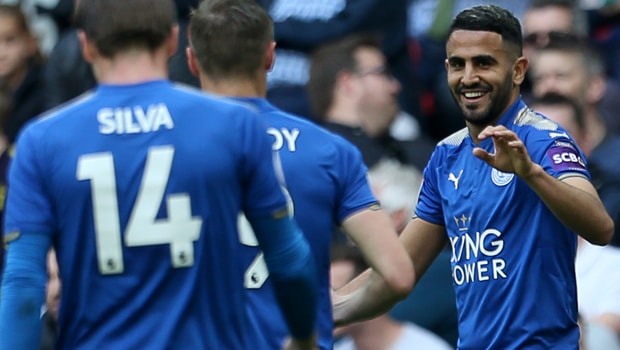 Riyad Mahrez believes Manchester City can provide the perfect environment to continue his development after completing a move from Leicester.

City have been pursuing the Algeria international since January when he handed in a transfer request in order to force through a move.

Leicester were reluctant to let their star man depart during the winter window and their valuation of around £90million was enough to end negotiations.

However, City continued to monitor Mahrez from afar and they have now finally got their man as they attempt to successfully defend their Premier League crown next term.

The Cityzens, who are priced at 1.60 to win the Premier League next season, have parted with a club-record £60million for the left-footed winger who played a crucial role in helping Leicester to win the title in 2015-16.

The 27-year-old has penned a five-year contract and believes Pep Guardiola can help him to step up to the next level at the Etihad Stadium.

Mahrez told the club’s official website: “Watching them from afar has been a pleasure.

“I think we can be successful over the coming years and I believe my own game can develop under Pep’s management.”

The former Le Havre man, who joined Leicester for just £400,000 in 2014, is City’s first piece of transfer business this summer.

Director of football Txiki Begiristain was key in negotiating the deal and feels Mahrez fits perfectly into the club’s attacking philosophy.

“Over the past few years, he has established himself as one of the Premier League’s most exciting players. We’re sure he will bring additional attacking quality to our squad.”