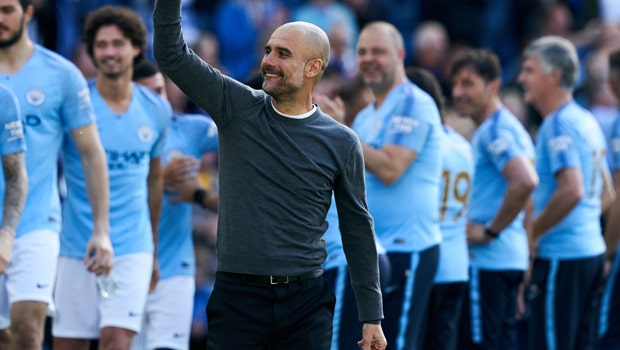 The Citizens edged out Liverpool by a single point after they ended the season with a 4-1 win at Brighton, having to come from a goal behind in doing so.

Liverpool held up their end of the bargain by overcoming Wolves 2-0 at Anfield, but it wasn’t enough for Jurgen Klopp’s team, as City ended the season with a 14-game winning streak in the league.

City won their fourth Premier League title, with only Manchester United (13) and Chelsea (5) having won more in the competition. All in all, City have won six English top-flight titles and they are the first side to retain the title since neighbours Manchester United in 2008-09.

For Guardiola, this was a battle hard-earned and he was quick to pay a compliment to Liverpool, the runners-up having lost just one of 38 league games and finished 25 points clear of third-placed Chelsea.

“We have to say congratulations to Liverpool and thank you so much, they pushed us to increase our standards,” said the Spaniard, who has won titles with Barcelonan and Bayern Munich previously as well as City.

“It’s incredible, 98 points, to go back-to-back. We made the standard higher last season and Liverpool helped us.

To win this title we had to win 14 (league games) in a row. We couldn’t lose one point. “It’s the toughest title we have won in all my career, by far.”

Manchester City are 1.22 to complete a domestic clean sweep with overcoming Watford in the FA Cup final. The Hornets are 13.00 while the draw is 6.50.