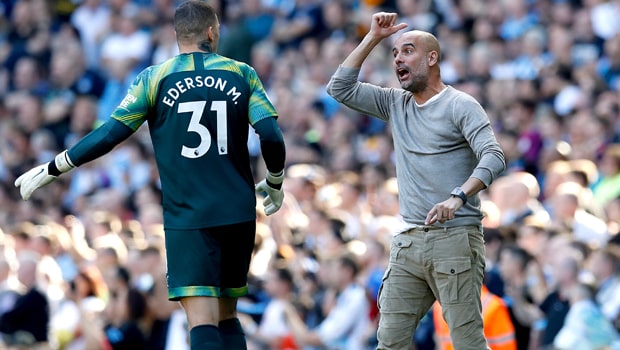 The gaffer was pleased with his side showing after the Citizens defeated Watford.

Manchester city manager Pep Guardiola heaped praise on his City side after the Citizens produced one of their best performances this season as they put eight past a helpless Watford side.

The Citizens lost to Norwich City last week and quickly returned to winning ways with a 3-0 win over Ukranian team Shakhtar Donetsk in the UEFA Champions League group stage. The Citizens took the lead after 52 seconds through Spanish midfielder David Silva.

Sergio Agüero doubled City’s lead in the seventh minute from the penalty spot, Riyad Mahrez scored the Citizens third via a deflection in the12th minute, Portuguese midfield maestro Bernando Silva scored in the 15th minute to extend City’s lead, defender Nicolas Otamendi slid in the fifth in the 18th minute.

Bernando Silva, on the other hand, completed his hat-trick after scoring in the 48th and 60th minute before Belgian forward Kelvin De Bryune completed City’s rout in the 85th minute to hand Pep Guardiola his biggest Premier League win since he took over in 2016.

Speaking to reporters after the game, the gaffer praised his side’s aggressiveness on the pitch of playm, “What I liked the most usually is when it’s 5-0 at half time the second half is not severe, it’s boring, everyone does what they want. But we did ultimately the opposite, we were serious, more aggressive with our pressing and made a perfect second half, People still don’t understand journalists, pundits, and former players.

Losing games is part of life. I have the same feeling now that I had after Norwich, so that was not a bad performance. We can lose the games; the important thing is the approach and how we react”, the Spaniards was quoted as saying.

Pep Guardiola’s side begins their Carabao Cup defense this Tuesday as they travel to Deepdale to take on Preston North End Football club.

Manchester City are fancied at 2.05 to be top of the Premier League on Christmas day, while Liverpool are priced at 1.65 to be top on that day.