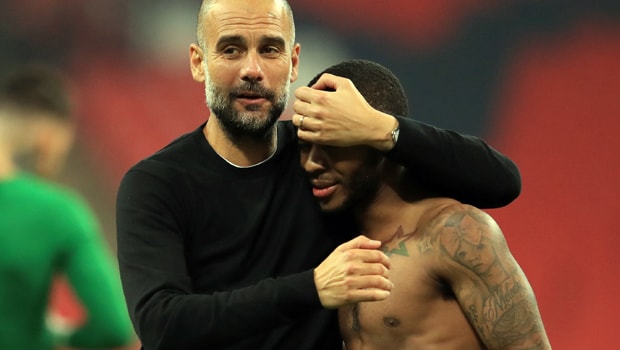 Manchester City boss Pep Guardiola has confirmed he wants Raheem Sterling to commit his future to the club by signing a new contract.

The England international has been on City’s books since joining from Liverpool in 2015 and he enjoyed his best season at the Etihad Stadium last term, as he netted 23 goals in all competitions.

The 23-year-old’s game certainly appears to have developed under the stewardship of Guardiola, although speculation remains regarding his future at the club, as he is into the final two years of his current contract.

Guardiola is in no doubt that he wants Sterling to remain with City and he has confirmed the club have already held discussions with the winger regarding a new deal.

“There’s no doubt we want him,” Guardiola said.

“He knows, his agent knows. We want him. Txiki [Begiristain, City’s director of football] spoke with him.”

Despite his desire to keep Sterling, Guardiola acknowledges that in the modern climate there is no guarantees that a player will commit his future to a club for the long-term.

“So, at the end, I don’t know what is going to happen, but I assure you 100 per cent that the club, myself like a manager, sport director, even his team-mates – we want him to stay longer here.”

City will kick-off the defence of their Premier League title next weekend when they travel to the Emirates Stadium to take on Arsenal and they are priced at 2.20 to win that match, while the Gunners are available at 3.20 and the draw is on offer at 3.60.