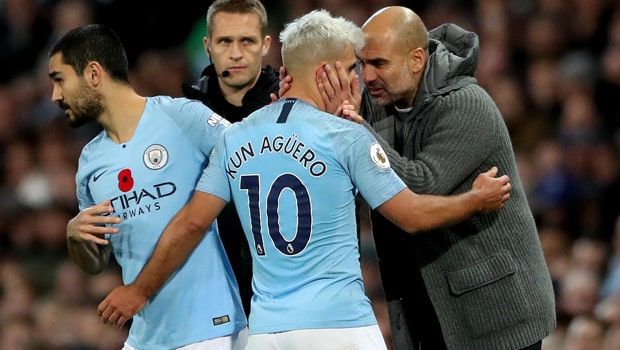 Manchester City boss Pep Guardiola is rubbishing suggestions his team are already well on the way to retaining the Premier League title after a 3-1 derby-day win over neighbours United.

David Silva, Sergio Aguero and Ilkay Gundogan all scored as City outclassed the Red Devils at the Etihad Stadium, with United responding only when home goalkeeper Ederson needlessly felled Romelu Lukaku in the penalty box.

Anthony Martial scored from the spot just before the hour-mark with what proved United’s only shot on target.

The win ensured City lead the table by two points from Liverpool going into the international break but, with only eight points separating the top five, Guardiola believes Liverpool, Chelsea, Tottenham and Arsenal are all big contenders for the title.

“I think Man City right now and Liverpool, Chelsea, and even Arsenal and Tottenham, I think they have numbers to be champion, not just City. We’re just two points in front,” he told reporters.

He did have a warning for his would-be rivals, however, after watching City scoring 15 goals in their last three games in all competitions.

Guardiola points out that City have earned better returns from two of their toughest games compared to last season’s record-breaking efforts.

“Last season we didn’t get points at Anfield, we draw this time. Last season we lost here [against United], but we won. So it’s good, four games against contenders, three away just one at home,” he added.

“What is important is that we are consistent, that we play most of the time good, and always I see many things that we can improve.