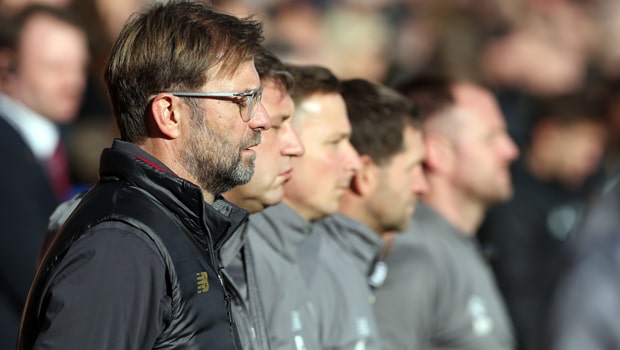 Jurgen Klopp preferred to focus on how his Liverpool players took advantage of a lucky break rather than dwell on a questionable offside call that denied Fulham a lead in the 2-0 win at Anfield.

Aleksandar Mitrovic headed Andre Schurrle’s cross into the Reds net three minutes before half-time only for the offside flag to deny him.

Replays suggested Andy Robertson was playing the Fulham forward onside but Liverpool didn’t waste any time once the decision went their way.

Goalkeeper Alisson fed Trent Alexander-Arnold with the free-kick and the full-back’s long pass sent Mohamed Salah through on goal with Fulham short-handed at the back.

Within 14 second of Mitrovic finding their net, Liverpool were in front. Xherdan Shaqiri would add Liverpool’s second shortly after half-time and from there they coasted home.

Klopp felt his team had an offside call go against them when they played Arsenal recently. He admitted Robertson had perhaps played Mitrovic onside but he lauded his players for reacting quickly to the officials’ decision.

“I don’t want to compare it but we scored a clearer goal against Arsenal which we didn’t get,” said the Liverpool boss.

“You cannot change it, the most important thing is reacting that quick in that situation and it was brilliant: Alisson, Trent [Alexander-Arnold], Mo and done.

“It is very important you have these situations in your locker that you can use it.”

The win, coupled with Chelsea’s home draw against Everton, sees Liverpool as Manchester City’s closest pursuers in the title race, the Reds two points behind after 12 games.

Klopp is happy with their lot at this point, despite relying on some good fortune to see off bottom-of-the-table Fulham.

“Apart from scoring more goals it was a really good performance.

Fulham always have the quality to cause problems. We had to work hard, we won it. All good.”

Liverpool are 4.25 to win the title this season, while Fulham are 1.50 to be relegated after suffering their seventh straight league defeat.