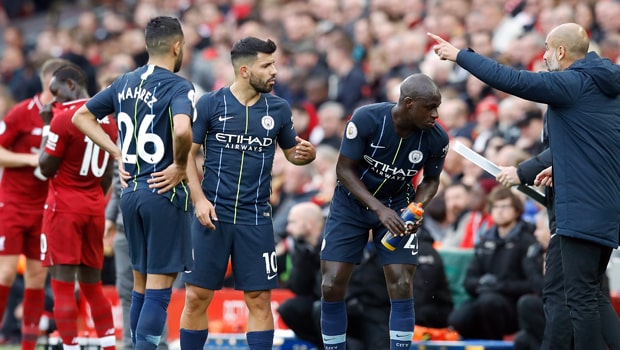 Pep Guardiola was delighted to take a point from Manchester City’s trip to Liverpool, despite the champions missing a late penalty in the goalless draw.

City have not won a league game at Anfield in 15 years – and Riyad Mahrez wasted a glorious opportunity to end that run when he blazed over late on after Virgil van Dijk had tripped Leroy Sane.

Sergio Aguero, City’s regular penalty taker, had gone off and Mahrez, signed for £60m this summer from Leicester, appeared to win an argument with Gabriel Jesus over who was going to take the spot-kick.

It was a point that pleased Guardiola, whose side had previously lost three times in a row to Liverpool since January.

“We’ve had 40 or 50 years of not winning here and often we’ve lost. It’s a good result – I’m so satisfied with what we have done,” said the City boss.

“As a team you know Liverpool will punish our mistakes, and at the back we controlled it very well.

So, it would be better to win at Anfield, but we don’t lose, last season we lost here, this season we draw, maybe next season we win, we will see.”

Mahrez has now missed five of his last eight penalties but Guardiola was not overly concerned by the Algerian missing.

He did however apologise to Jesus for denying him the opportunity to score.

“During the training sessions every day I see Mahrez taking the penalties and it gave me a lot of confidence. It will be good experience for him, next time it will go in,” Guardiola added.

“Jesus wanted to (take it). I apologise. It was my decision.”

Following their stalemate, City and Liverpool are level on 20 points, together with Chelsea, after eight games.

The Citizens are favourites at 1.62 to retain the Premier League, with Liverpool 3.10 and Chelsea 8.50.