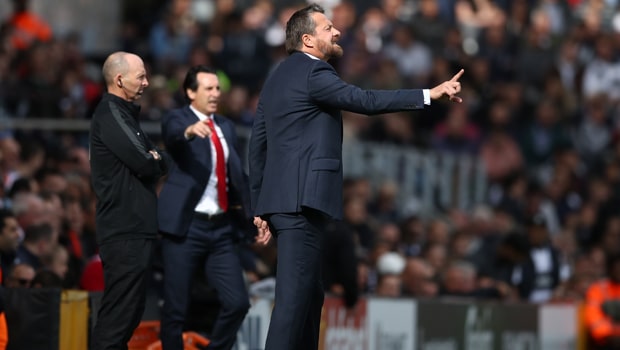 Slavisa Jokanovic knows that Fulham must work on their “defensive weaknesses” if they are to get their Premier League campaign on track.

His side were brushed aside by Arsenal on Sunday, going down 5-1 in front of their own supporters at Craven Cottage.

Fulham are the only Premier League side yet to keep a clean sheet this season, and the Cottagers have also conceded 21 goals – the most in the division.

They went out with attacking intent against the Gunners, registering 12 shots on goal in the first half, with Andre Schurrle cancelling out Alexandre Lacazette’s opening goal.

“It is without any doubt a hard defeat for us, we tried to create things but showed many weaknesses as they scored easy goals,” said Jokanovic.

“We tried to be offensive and play high with two full-backs to find a solution – but from the second goal it is clear the plan was not working. We really need to work on the weaknesses in the defensive side.”

While their defensive woes are causing concern, the Fulham boss isn’t panicking at this early stage, hinting that they won’t always be facing opponents with Arsenal’s quality.

“It [conceding goals] has to be a worry always. It is a hard result, but today Arsenal showed their quality and pace.

We have 90 [possible] points ahead of us and we need to be brave and keep on fighting,” he added.

Fulham are 3.10 to be relegated this season, having won promotion from the Championship in May.