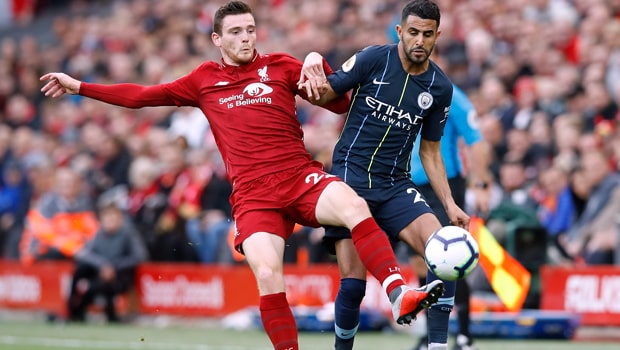 Liverpool defender Andrew Robertson feels it would be wrong to assume the Premier League title race is just between themselves and defending champions Manchester City.

The Reds played out a scoreless draw with Pep Guardiola’s team at Anfield on Sunday, surviving a big scare late on when Riyad Mahrez missed a penalty after Virgil van Dijk tripped Leroy Sane.

Liverpool, City and Chelsea have all gathered 20 points after eight games, the trio separated only on goal difference at the top.

Arsenal have won six games on the spin after losing their first two under Unai Emery and are only two points behind in fourth.

Liverpool’s return of 20 points is their joint-most after eight games of a Premier League campaign, but Robertson isn’t buying talk of a two-horse title race at this stage.

Jurgen Klopp’s side have, says the Scotland international, proved they belong in the discussion.

“We feel we can compete with any team but people seem to be just dismissing other teams and making it a two-horse race, which is not the case,” said Robertson.

“We played Chelsea last week, who were excellent. They have been on a great run.

“You see teams like Arsenal with a new manager putting great results together so there is a long way to go and there will be a lot of teams competing but we hope we are one of them.”

Liverpool’s attacking verve was missing against City, the Anfield men passing up a chance to record a fourth straight win over the Citizens this calendar year, but Robertson felt it was a positive to take a point when they clearly were not at their best.

“We can play a lot better but on days when you are not at your best it is important not to drop points. Against a very good team we managed to do that,” he added.

Liverpool are 3.10 to win the title with City favourites at 1.62 and Chelsea 8.50 after their win over Southampton on Sunday.