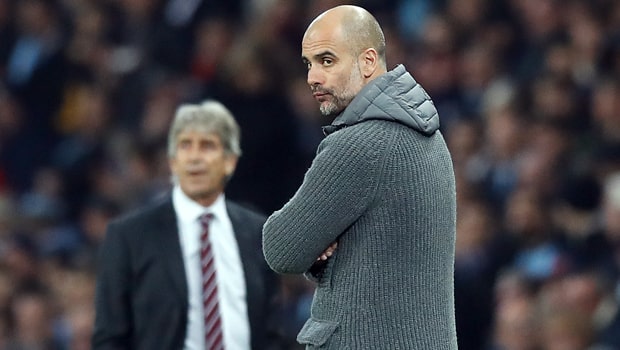 Pep Guardiola anticipates both his Manchester City side and title rivals Liverpool are going to drop points in the coming weeks.

The Spaniard watched as the champions needed a second-half penalty from Sergio Aguero to squeeze past an organised West Ham outfit 1-0 at the Etihad Stadium on Wednesday evening, despite dominating the game.

It ensured they stayed a point behind Liverpool, as Jurgen Klopp’s side boosted their own confidence with a thumping 5-0 win over Watford at Anfield.

Guardiola’s side go to Bournemouth next, while Liverpool face a Merseyside derby trip to Everton. The City boss does not expect it to be plain sailing for either team in the title run-in. “Many things are going to happen,” he said.

Aguero sent Lukasz Fabianski the wrong way for his 25th goal of the season from the spot just before the hour mark, much to City’s relief. One area that may give Guardiola concern is the form of Riyad Mahrez, a £60m purchase from Leicester last summer.

The Algerian was in from the start against the Hammers but struggled and was replaced by Raheem Sterling ten minutes into the second half.

“Riyad played good – he took some risks and unfortunately he hit the first player often,” added the coach.

“Normally he is so clinical, such a good player at finishing in the first action with the right foot, but of course sometimes you need time to connect between the players and that is going to happen.

City are favourites at 1.53 to retain their Premier League title, with Liverpool 2.60 despite their slender advantage.