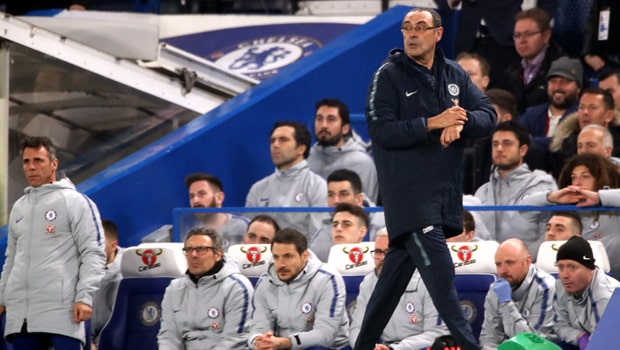 Maurizio Sarri hopes Chelsea’s 2-0 win over Tottenham at Stamford Bridge can drag their London rivals into the scrap for a top-four finish.

Pedro scored Chelsea’s crucial opener just before the hour-mark, while Kieran Trippier made the win safe late on, as the Spurs defender sent the ball into his own net after a breakdown in communication with goalkeeper Hugo Lloris.

The defeat means Spurs are now nine points behind league leaders Liverpool and eight adrift of Manchester City in second spot. They remain third, seven clear of Chelsea in sixth, although Sarri’s side have a game in hand.

Should Chelsea win that game, it would leave just five points covering Tottenham, Arsenal, Manchester United and themselves, with the quartet all determined to take a top-four spot.

It has been billed as two-from-three until now, but Sarri hopes Chelsea’s win can give Spurs some food for thought.

“It was really very important tonight because we’re fighting for the top four,” he said.

“I don’t know but I think maybe with this result we could involve Tottenham in this fight. The gap is very large, seven points, but we have one match (in hand).”

Meanwhile the Italian says Kepa Arrizabalaga has paid for his Carabao Cup final indiscretion having been fined by the club and dropped in favour of Willy Caballero for the Spurs game.

Kepa refused to be substituted during extra-time at Wembley on Sunday, with Chelsea subsequently losing a penalty shootout to Manchester City 4-3.

However, Sarri does expect that the £71m goalkeeper will be back between the posts soon. “Kepa made a big mistake, he paid with the club and then he had to pay with the team. Now I think we have to stop,” he added.

“I don’t know if in the next match he will be on the pitch or not. In one of the next two, for sure.”

Chelsea are 1.91 to finish in the top four this season, with Arsenal 3.00 and Man United 2.00 following wins over Bournemouth and Crystal Palace on Wednesday. Spurs are firm favourites at 1.25 despite their Stamford Bridge setback.