Pep Guardiola: We are not favourites 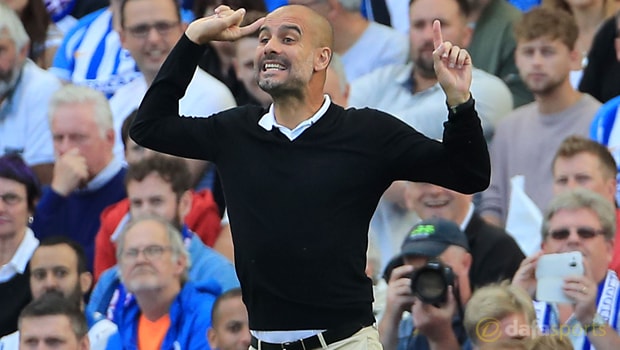 Manchester City coach Pep Guardiola insists his team should not be considered the favourites for the Premier League title after they beat Brighton on the opening day.

The Citizens, 2.25 to win the Premier League title, were put through their paces on Saturday evening by the newly promoted side.

Chris Hughton’s Brighton were dominated for the majority of the game but they did show their potential on occasions.

Sergio Aguero eventually opened the scoring in the second half and a Lewis Dunk own goal secured the three points but Guardiola was determined to keep his feet on the ground.

Rivals Arsenal struggled to beat Leicester, while Liverpool drew with Watford before Chelsea suffered a shock defeat to Burnley.

Despite the results going in their favour, Guardiola insists nobody at the Etihad Stadium can get carried away. He told reporters: “Last season it was too.

Last season sitting here after the Sunderland game you said, ‘You are the favourites, you are the most beautiful and handsome and nice guys in the league’.

“After you know what happened last season? Chelsea killed us. Okay, we accept what the people say, we have to try to improve and improve.

“I’m so satisfied with what we have done, but of course we can get better. About who is the favourites or not, it’s your (the media’s) job, not ours.

“What I cannot control doesn’t matter. Last season it was the same and look what happened.

But I’m used to that. I was manager at Barcelona and Bayern Munich. I can handle that situation.”