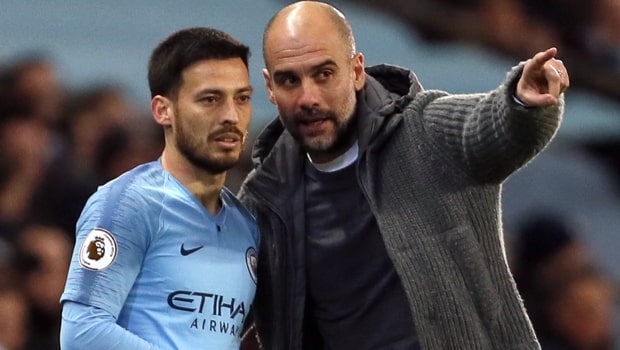 Pep Guardiola’s response to watching Manchester City thump Chelsea 6-0 at the Etihad Stadium was simply to thank his players for what they are doing.

The victory was City’s third in the space of eight days since a surprise 2-1 defeat to Newcastle at St James’ Park threatened to derail their title defence.

They have also taken care of Arsenal and Everton and now lead Liverpool on goal difference in the title race – though the Anfield men have a game in hand.

Sergio Aguero scored a hat-trick – a record-equalling 11th in the Premier League – while Raheem Sterling hit a double and Ilkay Gundogan also scored as City ripped Chelsea to shreds.

They led by four after 25 minutes and Chelsea simply had no answer to their pace, power and movement. Following the defeat to Newcastle it has been an impressive response from the champions and Guardiola was quick to pay tribute to his team.

“I just said to them thank you for what they have done,” said the Spaniard.

“After Newcastle we spoke to each other and put ourselves in front of a mirror, and accepted the reality. After that we worked, moved forward. “We are there, we are the leaders, but Liverpool have one more game (in hand).”

Guardiola, who won three Spanish titles and two Champions League crowns during his time in charge of Barcelona, was asked how his current side compared to the one he had at Camp Nou. He suggests his current squad has some way to go, but doesn’t doubt their attitude.

“We have won three [trophies] since we have been together. In Barcelona we won much, much more,” he said.

“But in spite of the titles, the desire to do their best and respect for where they are is incredible. That is quite similar, but I don’t want to compare.”

Manchester City are marginal favourites at 1.83 to win the title this season, with Liverpool now 2.10.