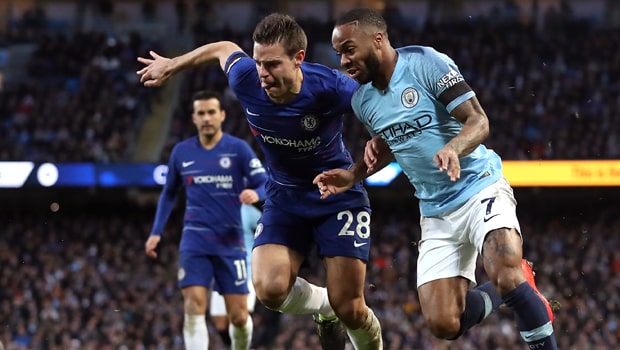 Chelsea’s Cesar Azpilicueta admits the 6-0 drubbing by Manchester City was amongst the worst experiences of his career.

The Blues were torn to shreds by the Premier League champions at the Etihad Stadium, Sergio Aguero helping himself to another hat-trick alongside a brace from Raheem Sterling and an Ilkay Gundogan goal.

Maurizio Sarri’s men found themselves trailing by four goals before the half-hour mark and experienced defender Azpilicueta, who was given a torrid time by winger Sterling and conceded the penalty for Aguero’s third goal, admitted it simply wasn’t good enough.

“It’s difficult to find the words to describe my feeling after the game. It is one of the worst nights in my career. It’s very frustrating, it’s very disappointing,” he told reporters.

It was the Blues’ third defeat in four Premier League games, coming after a 2-0 loss at Arsenal and a 4-0 thrashing by Bournemouth, while they thumped bottom-side Huddersfield 5-0 in between.

Azpilicueta suggests they are leaking too many early goals in big games, as he lamented the difference in performance levels compared to their excellent 2-0 win over City at Stamford Bridge earlier in the season.

“We have lost big games in the first minutes and we are conceding a lot of goals. We cannot accept that,” he added.

“We knew we had one of the best teams in front of us and we knew it would be tough.

“When we won against them at Stamford Bridge it was because we played a very good game all together. This time it was not the case. To lose in this way is very disappointing.”

Chelsea are 1.36 to bounce back by beating Malmo in the Europa League on Thursday in Sweden. The hosts are 9.00 to win, while the draw is 5.00.