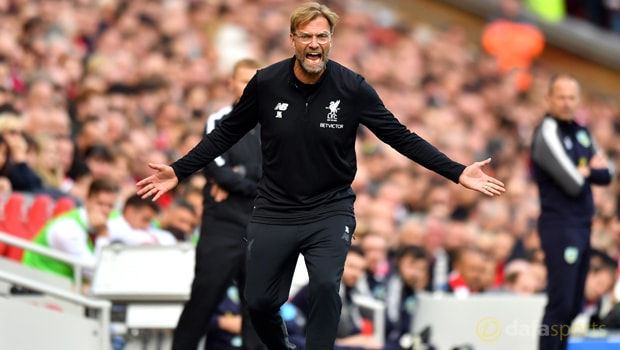 Liverpool boss Jurgen Klopp said he was “angry with the result but pleased with the performance” after they were held to a 1-1 home draw by Burnley.

The Reds had 35 attempts on goal – since 2003-04, they’ve only had more in a Premier League match once – but found visiting stopper Nick Pope in a resilient mood.

Scott Arfield stunned Anfield when he put Burney ahead on 27 minutes with a crisp shot but Mohamed Salah quickly restored parity and, with Liverpool coming forward at will, more goals seemed inevitable.

Despite dominating possession, the Reds were not able to find the crucial goal they needed and they could even have lost the game late on then Ben Mee saw a header cleared from the goal line by Joel Matip.

It was another frustrating game for Klopp, hot on the heels of the 2-2 Champions League draw with Sevilla.

The German said the blame for dropping two points was all Liverpool’s, but he refused to be overly critical of the performance from his players.

“It’s our fault. We were dominant, fantastic attitude. We played good, were fluent with seven changes, but only one goal,” said Klopp.

“It’s the best we have played against Burnley since I have been in. In the past we didn’t feel good in the game. I saw fluid movements, passing between the lines, speed, crosses.

“We have to take the point and carry on.” With Sadio Mane suspended, Klopp offered a first start of the season to Philippe Coutinho following his much-publicised summer attempt to leave the club.

The Brazilian came off late on, something his manager said wasn’t planned. “Philippe had a really good game. He had a little cramp at the end.

We did not plan to take him off but we had to decide differently,” he added.