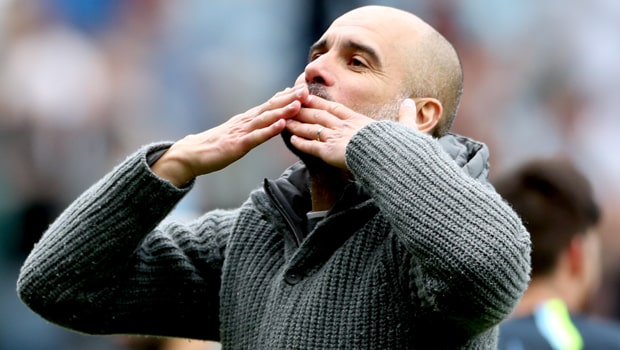 Manchester City manager Pep Guardiola has praised the response from his squad after their exit from the Champions League earlier this month.

City’s hopes of sealing a historic Quadruple were ended by Premier League rivals Tottenham at the quarter-final stage of the elite European competition on April 17.

Spurs edged the tie on away goals after a 4-4 aggregate draw over two legs and it threatened to derail their campaign.

But City, who are priced at 1.17 to win the Premier League, have shown incredible character to move on swiftly after claiming three successive wins in the league against Spurs, Manchester United and Burnley.

Sunday’s trip to Burnley was always expected to be a tricky encounter and City had to be patient against a well-disciplined outfit.

Sergio Aguero netted the only goal of the game at Turf Moor to take City back to the top of the league, and victories over Leicester and Brighton will ensure they retain the title.

Guardiola has called for calm as they approach the final two games of the term while praised their response over the last couple of weeks.

“It is not easy, especially with our [Champions League] defeat against Tottenham,” Guardiola said. “Our reaction has been outstanding, overwhelming, to come here without Kevin [De Bruyne], without Fernandinho, and play the way we played.

“And now it’s two games left, we need to be calm until next Monday, and against Leicester we are going to get three more points to go to Brighton to win the league.”