Pep Guardiola: Every game is a final 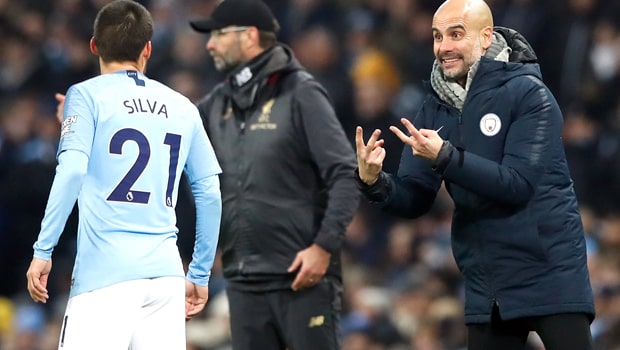 Manchester City boss Pep Guardiola insists every Premier League game is now ‘like a final’ in the wake of a 2-1 win over table-toppers Liverpool.

The defending champions turned in a high-octane and determined performance at the Etihad Stadium as goals from Sergio Aguero and Leroy Sane inflicted a first league defeat of the season on Jurgen Klopp’s team.

The Reds had silenced the home crowd just after the hour when Roberto Firmino cancelled out Aguero’s opener but, following excellent work from former Liverpool winger Raheem Sterling, Sane arrowed a low shot beyond Alisson to give City the much needed a win.

Guardiola suggests it is far from a two-horse race for the title, with Spurs just two points behind his team in third, but the Spaniard conceded defeating Liverpool was vital in the circumstances.

“We knew that if we won we would be in contention to fight for the Premier League, if we lose it is over,” Guardiola said. “I don’t remember a league so tough.”

He added: “There are so many huge contenders fighting for the title. It is closer, every game is a final.”

Liverpool would have held a 10-point lead over City had they won, but the defending champions showed they remain up for the fight, despite a Christmas of discontent for Guardiola and his side.

The City boss attempted to suggest as many as six clubs can be considered title contenders and he says the result was good for the league overall.

“They are leaders, it is four points but we have reduced the gap,” Guardiola said.

“I respect what Tottenham are doing, in the last games Manchester United are coming back, and of course Chelsea and Arsenal with new managers.

“Jurgen Klopp will not agree, but for the Premier League it is a good result.”

Liverpool remain favourites at 1.80 to win the title, with Manchester City now 2.20 to retain their crown. Tottenham are next best at 21.00.