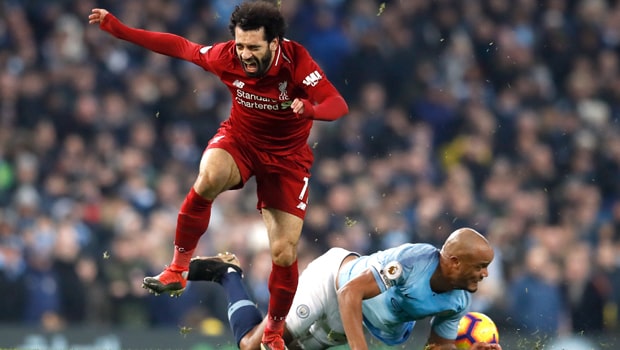 The Belgian lunged at Liverpool’s talisman while the game was still locked scoreless but escaped with only a booking for his troubles.

Sergio Aguero and Leroy Sane went on to score either side of Roberto Firmino’s close-range finish as the champions inflicted a first league defeat of the season on Liverpool.

The Reds boss had no doubts that referee Anthony Taylor should have sent Kompany packing for his reckless tackle, insisting Salah was lucky to come away unscathed.

“I really like Vincent Kompany but how on Earth is that not a red card?” asked Liverpool boss Klopp afterwards.

“He is last man and he goes in. If he hits Mo more he is out for the season.”

A loose pass from team-mate John Stones forced Kompany to make his tackle and the City man felt it was a fair challenge, despite admitting he got a piece of Salah.

“I thought it was a great challenge, was it not? I got the ball, a little bit of the man but it wasn’t naughty,” the Belgium international said.

“I didn’t try to injure him. It was that or let him go through on goal.”

Sadio Mane struck the post for Liverpool early on, with Stones almost turning the rebound in off his own goalkeeper.

For Klopp, it was a game of slender margins and he suggests Liverpool will move on, undeterred in their quest for a maiden Premier League title.

“Our expectations are high. We can play better. You have to take the game how it is. You can’t always dominate it,” added the German.

“We were unlucky in our finishing moments. Unluckier than City I would say.”

Liverpool remain title favourites at 1.80 but City, now just four points adrift, have been cut to 2.20 while third-placed Tottenham are 21.00.